An Elevator into Space

Imagine the tallest building you have ever seen.  Is it tall enough to scrape the clouds, block the sun, and leave you in awe?  Engineers and scientists are already working on designing a structure that will make even the world's tallest building look tiny in comparison.  The International Space Elevator Consortium meets annually to put pen to paper and figure out how to make this mega-structure a reality.  If you didn't catch it, the hint was in the name - we're talking about an elevator into space. 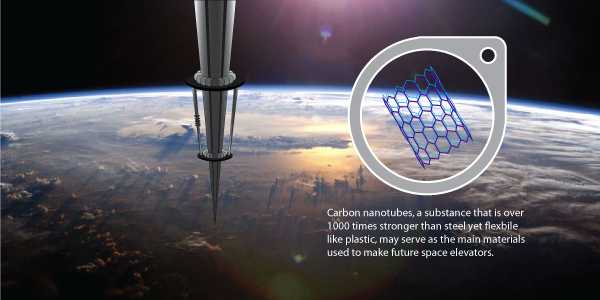 Space elevators were popularized in a 1979 novel named "The Fountains of Paradise" by world-renown author Arthur C. Clark.  Almost 45 years later, no organization has been able to build a space elevator, but scientist and engineers think it might be a possible in the near feature.  The motivation for building a space elevator comes from the huge cost of sending satellites, people, and spacecraft into space.  In fact, each of NASA's 100+ missions since 1981 has cost millions of dollars.  Every pound of equipment, person, or spacecraft costs about $10,000 ($22,000 per kilogram) to carry into space!  The huge expense comes from the cost of creating, operating, and maintaining expensive rockets that guzzle fuel in order to push themselves into orbit.  Finding a cheaper solution will not only allow for more frequent missions into space but also save taxpayers billions of dollars in the long run.  The desire and motivation to build a space elevator are clear – why hasn’t it be done yet?

The answer is that engineering a space elevator is very challenging; many different fields such as materials scientists, mechanical engineers, structural engineers, physicists, and, oddly enough, oceanographers have to come together to devise a solution.  A space elevator would require an Earth-based installation that acts like anchor and load point for people and equipment (the lobby of an elevator).  The thousands of miles long tether (the elevator shaft) would then connect the base station to the orbital terminal (the highest floor of the elevator) that remains in geosynchronous orbit, or circles the Earth at the same speed it rotates so that it stays over the same spot over the planet.  The orbital terminal also serves to keep the tether taught through the centrifugal force; though technically not a real force, the centrifugal force is the tendency of rotating objects to move away from the center of rotation (think of how a rope lengths out and straightens if you spin one end of it in your hand).  An elevator would then climb the tether to reach space and unload the equipment onto a spacecraft or space station waiting in orbit.

To add to the complexity the base station would likely need to be a floating platform in the ocean allowing it to move.  As the base station moves, the tethered orbital terminal thousands of miles above would move along with it.  This movement would be necessary to avoid hazardous space debris that could damage or destroy the orbital terminal or tether.  The tether would thus need to be incredibly strong yet flexible to not only support itself up through Earth's atmosphere into space but to withstand the shearing movements of the base station from voluntarily moving, winds, and ocean waves (think of trying to move an extremely tall stack of coffee mugs without dropping any of them as you shuffle across your room).  Therein lies the central problem, what material could we construct the tether out of to handle such a huge burden?

Scientists point to carbon nanotubes, materials 1000s of times stronger than steel but as flexible as plastic, as a potential solution.  Thus far scientists have only been able to produce rods that are a few centimeters long - braiding the rods together to form a longer one as is done in suspension bridge cables is not an viable option because the carbon nanotubes strength diminish over distance.  Though it might work on a small scale, scientists have yet to find or create a material able to fit the need.  As a result, only a few companies such as LiftPort have taken interest in pursuing space elevator designs, but the next materials science break through may turn Arthur C. Clarke's vision into a reality.