Archgineers: Design of the Gateway Arch

Sometimes when we look at landmarks or monuments we don’t realize the countless hours of brainstorming and planning that went into their design.  We may stand in awe for a few moments but the complexity of the engineering and science needed to construct them escapes us.  Nearly fifty years ago construction started on the Gateway Arch, a 630-foot-tall, 17,246 ton monument to the westward expansion of the United States, situated on the west bank of the Mississippi River in St. Louis, Missouri.  Being the scientists and life-long learners we are, our recent trip to NSTA:STEM in the arch’s hometown left us curious about its construction.

Commissioned by President Franklin D. Roosevelt, the design was chosen though an architectural competition for its timeless beauty and bold design.  Lead architect Eero Saarinen and structural engineer Hannskarl Bandel represented the brilliance behind the massive construction.  What appears to be a single, solid archway is actually a complex skeleton of triangular-shaped wedges that precisely fit together to create a smooth arch. 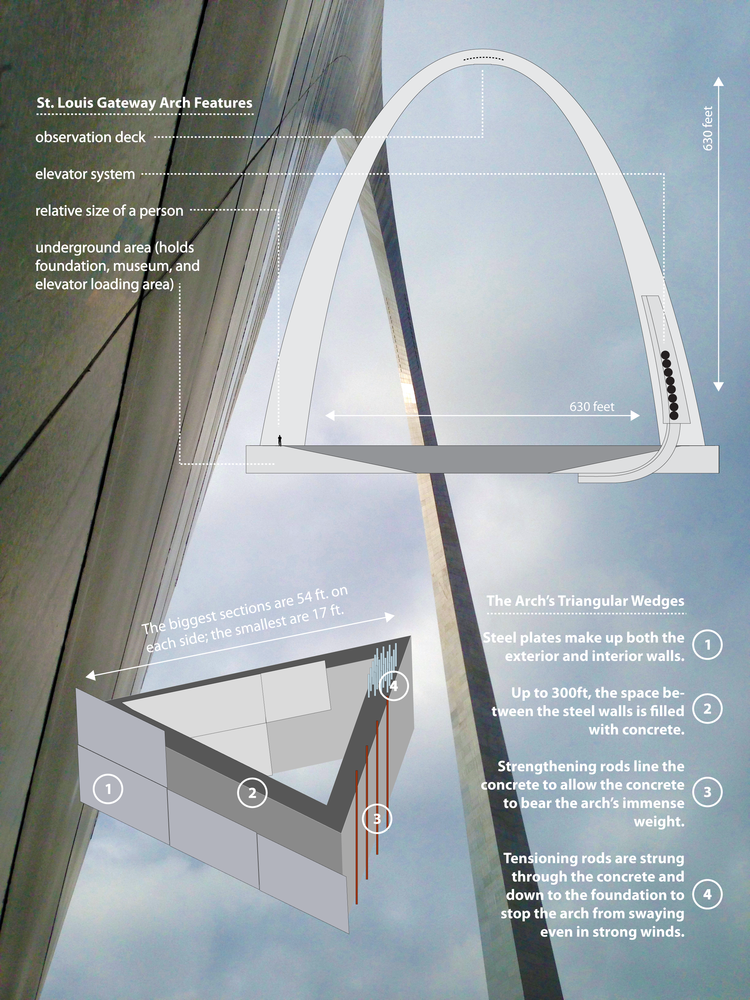 Saarinen and Bandel’s plans were remarkably simple.  Each leg would be built independently and slowly curve to meet in the middle; the 142 12-foot-long wedges would be constructed off-site, imported by rail, and then hoisted into place using cranes.  Workers would then crawl along the scaffolding to weld and permanently fuse the pieces together.  The interior of each wedge carried long tension wires that prevented prevent the archway from swaying and cracking even in hurricane force winds and to fit a small elevator for future visitors to the observation deck at the top.

When the legs reached 100 feet in height engineers had to innovate – the cranes could not be built higher than 100 feet and still lift the heavy wedges into place.  Their solution was to build a railway into the sky.  On the back of the arch’s legs, a rail served to lift a derrick (a large construction platform) into the air along each leg.  The unconnected legs had to support their own weight, dozens of workers, a massive 100-ton derrick, and the construction wedges carried upon the derrick.  Nicknamed “crawler cranes,” the derricks acted like elevators on the spine of the archway adding one layer at a time.  At 530 feet, a truss, or a large support beam, was placed in-between both legs to keep them from collapsing due to all the weight they had to support while unconnected.

The day the arch was to be completed, the fire department had to hose down the south leg with cold water because the heat had caused the metal of the wedges to expand.  Using a combination of water and a powerful jack not unlike a car jack, the legs were forced apart to allow the final piece to slip into place.  The final piece in, the structure was completed on October 28, 1965, the end of a three year endeavor.