It's no surprise that traditional textbooks will soon go the way of the DoDo.  Students demand more engaging, interactive, and personalized ways to learn.  Join us then as we count down the top 10 reasons why textbooks aren't that effective when it comes to learning science.

A New Logo for a New STEMscopes

Posted by Science Explored on December 18, 2013

As we move into a new year, we are looking at STEMscopes in a new light.  Not only are we transitioning from a small department within Rice University to a full partner as Accelerate Learning, we are also preparing to unveil STEMscopes 2.0 in its entirety.  No need to worry though – let us address a few of the “rumors” we have heard regarding this transition:  1) we are not being bought out by “some company” (in fact, we are the creators of Accelerate Learning), 2) our dedication to teachers and students remains immutable, and 3) our ties with Rice University have been fortified while allowing us to grow substantially.

Posted by Science Explored on December 16, 2013

Most of us associate bees with painful memories of getting stung.  On the periphery, we know that they play a role in pollinating some of the crops we eat, but we seldom think much more of them.  As long as honey is stocked on supermarket shelves, all is well.  The reality is that bees are dying off in droves, and without action, many of the foods that color our dinner plates will follow in suit.  In fact, bees are so crucial to crop pollination that nearly 1 in 3 bites of food you eat today is due to a bee’s handiwork.

In 2006, beekeepers began noticing a disturbing trend.  Honeybees were vanishing seemingly overnight.  The hives they tended would be stocked with honey, yet devoid of life.  Not long after, researchers coined the acronym CCD – colony collapse disorder.  To this day, CCD is somewhat of a mystery.  Scientist across the globe have named a variety of culprits responsible for these mass bee deaths, but the research data are still inconclusive as to which is playing the lead role.  To put things in perspective, one-third of U.S. honeybees died during the 2012-2013 winter.  The die-off is so great that beekeepers are often being driven out of business.  Unsurprisingly, the U.S. Dept. of Agriculture’s Bee Research Laboratory is trying to unearth the cause.  Jeff Pettis, leader of the institute, is fearful that we may be too late to impact a real change if no action is taken soon.

Posted by Science Explored on December 05, 2013 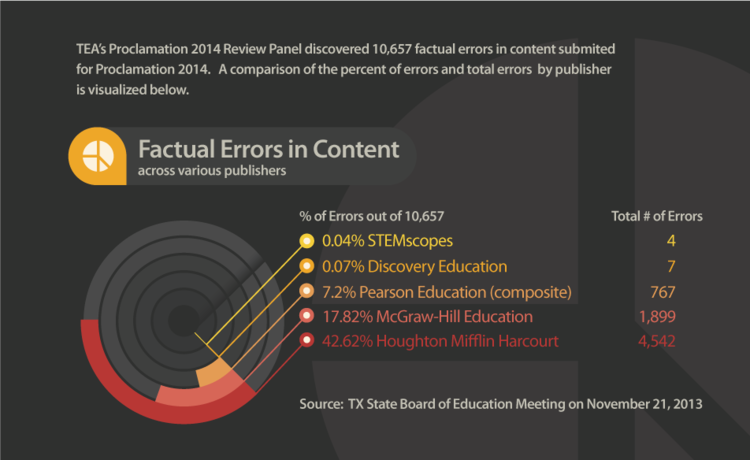 The Texas State Board of Education has released the Proclamation 2014 science curriculum review findings; their discoveries were unsettling.  Across all science curricula submitted for the 8 year adoption, the content reviewers identified 10,657 factual content errors (see below).  STEMscopes, however, had the fewest among publishers submitting K-12 science curriculum.

Posted by Science Explored on December 02, 2013