Posted by Science Explored on February 03, 2014

Many people have claimed to have a sixth sense, but new research from Frontiers in Zoology indicates that dogs may have an additional sense beyond the standard smell, sight, taste, touch, and hearing.  Magnetoreception refers to the ability to sense variations in the Earth’s natural magnetic field.  Several mammals, including cattle, roe deer, red deer, and hunting red foxes, have frequently been shown to be mangnetosensitive.  The height of their magnetosensitivity is best observed during defecation.  Yes, dogs react to the Earth’s magnetic field, most, while pooping.  The question, now, is, how reliable are dogs as a compass?

Though the study involving hundreds of observations across dozens of dogs of varying breed and size, scientists are not sure as to why canines align themselves in a north-south (the head pointing either north or south) direction.  However, there is one theory as to why our furry friends might do this.  Scientists suggest that dogs align themselves while defecating to help “calibrate” their mental maps. As dogs relieve themselves, scientists believe they are using the visual landscape to overlay their perception of north, south, east, and west. Similar to when hikers periodically pause to check maps, smart phone compasses, and confer with one another about the right path, dogs stop, poop, and align themselves to the Earth’s magnetic field. This ability may have been handed down from dogs’ ancestors, wolves, who have massive territories (150-200 square kilometers).  Wolves possess excellent navigational skills due to visual references, scent markers, and (probably) an internal compass similar to dogs’. 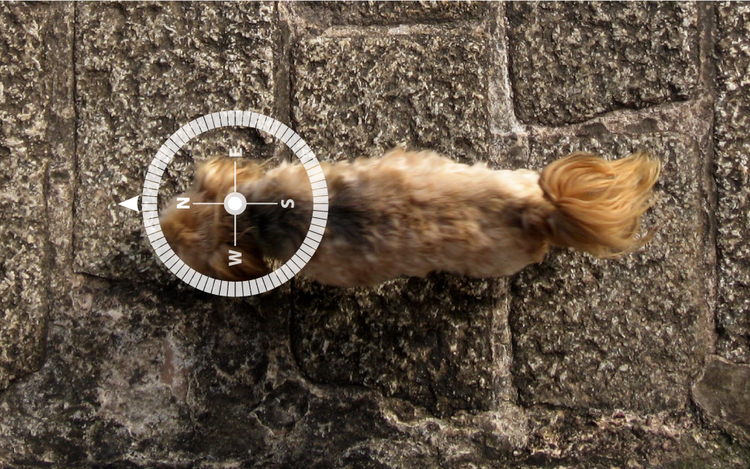 More testing is certainly needed.  This behavior was not observed 100% of the time but was seen consistently enough during urination and defecation for scientist to begin to see a pattern.  In fact, as the Earth’s magnetic field shifted over the course of a day, dogs were sensitive enough to detect the slight variances of north and south directions while relieving themselves.  Nevertheless, the Earth’s magnetic field often fluctuates more wildly due to magnetic storms caused by solar radiation.  In these turbulent moments, dogs were unable to properly align themselves resulting in unobservable magnetorceptive behavior.  At night, however, Earth’s magnetic field is relatively calm, allowing for more accurate data collection.  Think about this the next time your dog needs to take a quick restroom break, pull out your phone’s compass and check to see:  Is your pooch helping you determine which way is north?