Engineering: It's a State of Mind

Of all of the guardians of childhood, the Tooth Fairy was easiest for me to let go. You mean some little bitty fairy comes into my room, lifts up my pillow (aren't pillows too heavy for fairies?) and takes my tooth? That's pretty gross, and it's utter nonsense.

It was a bit harder for me to let go of the Easter Bunny—after all, he brings you Peeps! Plus, I'd seen bunnies (in fact, now I have one). The Tooth Fairy took things away from me, and I'd never seen a fairy. Nonetheless, the idea of a bunny hopping around on Easter morning did (kind of) seem pretty far-fetched.

Santa, on the other hand—now, that was tough (I may still not be entirely convinced). I tried and tried to reconcile my firm belief that Santa Claus must be real with the inklings of logic and reason that started to creep into my head at some point around age 10. I really had to wrestle with this one. I didn't just let it go. To me, knowing that I was giving up my belief in Santa Claus meant that I was growing up. I couldn't isolate one from the other. If I admitted that I didn't believe in Santa Claus, didn't that mean I wasn't a kid anymore? I didn't think I was ready for that. Finally, though, I did come around to the idea that there just isn't enough time in a 24-hour period for one man to fly all around the world and leave presents for all the good little boys and girls.

A change in a strongly held personal belief or opinion usually takes place over a prolonged period of time. It will most likely take repeated experiences and quite a bit of thought before the change really takes place, and it may be a bit uncomfortable, sad even, to let go of that belief and replace it with something new.

But, sometimes, something will stop you dead in your tracks, forcing you to confront the disconnect in your own schema and then carry on, with the new belief or opinion having swiftly stepped in to take the place of the old. I can point to only a few defining moments in my life where I have felt myself transition from one firmly held belief or opinion to another. I'd like to tell you the story of one. I'm about to admit my own misconception about something, making myself vulnerable to you, so please be nice.

At STEMscopes, we use the term "engineering" all the time. Engineering, quite literally, is our middle name (well, it's our third name if you read our name like this: Science, Technology, Engineering, Mathematics - Scopes). Engineering solutions are embedded into our curriculum, we talk about engineering practices (as described by NGSS), and we discuss the engineering careers that we hope the students who use our program will pursue one day.

Out with the Old

When I first heard the term the term "engineering", I visualized spaghetti noodle towers with delicately balanced marshmallows sitting atop. I thought of bridges, both those that we build in school out of balsa wood, and those we drive our cars across. I thought of wind turbines, the space station, offshore drilling platforms, and roller coasters. Here's the thing: engineering is absolutely associated with all of those things. At their inception, they are required engineering. And, engineering is absolutely represented in this way. I might have been operating on a definition something like this: engineering is the process we use to help us build things that make our lives earlier.

Now, I never questioned the importance of engineering in STEM education. Isn't it our purpose as educators to equip students with the skills they need in order to be successful outside the classroom as well as within? Yes, of course. And engineering, even as I narrowly defined it, most definitely develops positive skills such as collaboration, creative problem solving, and evaluation of information. I had no problems getting behind the application of engineering tasks in the science classroom, as it seemed a natural fit and also a worthwhile investment of time.

However, that is the extent of my previous opinion of engineering. I saw it as an add-on. I always imagined that, especially in a science classroom, the science standards would be the primary focus of instruction and then, as the standards lent themselves to an engineering task, a brave teacher could work the engineering in. I say a brave teacher, because it takes a certain amount of confidence to try an engineering task if it is unfamiliar to you. And, here's the tough part, I sincerely believed that a student could have a very high quality science education experience without ever engaging in an engineering task.

There, I said it That was the belief I was holding on to. I could be an exceptional science teacher without ever even considering adding an engineering task to my lesson plans. It would be a nice addition, but not a necessary one.

I was doing a little light reading from A Framework for K-12 Science Education and Taking Science to School. With engineering related topics swirling around my head, I came upon the results of a research study.

Schauble, Klopfer, and Raghavan (1991) were interested in comparing the approaches of 5th and 6th grade students to a task when it was presented in an engineering context versus a science context.

When I read their findings, I was flabbergasted. They found that students, when operating under an engineering model, focused on achieving a desired outcome or result. The ones who were operating under a science model were more focused on understanding cause and effect relationships. Additionally, students using the engineering model tended to stop working when they achieved the desired outcome, while students using a science model didn't stop until they had tested each of the individual variables.

Let's pause and think about that in terms of the classroom. Which of these pathways looks more desirable to you?

It didn't take me too long to realize that even though option (2) sounds more like our good friend The Scientific Method (in that it requires the isolation of variables), and that I should probably lean towards that option for the sake of science, I actually preferred the way option (1) would "look" to my students.

In with the New

I read that thought, hmm. Engineering is not simply a process. It's a mindset. It's a unique way of thinking about a problem. Instead of looking at a problem as something that has to be solved through a specific procedure and with only one attempt at getting at it right, you get to look at it as something that has some fluidity, and forgiveness. Of course, the stakes are sometimes very high, even in an engineering mindset, but in most cases, the iterative nature is at the very heart of engineering.

So I stopped looking at engineering as just as process you go through to build structures, and started to think about its implications for the mastery of science standards, along with those "soft" skills we feel are so critical to develop alongside the content in our students.

But how does engineering fit into science teaching?

Let's take solubility as an example. A typical solubility experiment might ask students to determine the relationship between surface area and rate of solubility. And, what do we expect students to find? Ideally, they'll find evidence that supports that the greater the exposed surface area of a solvent, the faster it will dissolve.

But, what if we just frame it a bit differently? Instead, let's ask students to find the quickest way to dissolve a hard peppermint candy (the kind you find in restaurants). Now, there is a goal, a desired outcome, invoking a bit of competition too. And, we haven't limited the students to examining one single factor at a time! They might discover that temperature affects solubility! Or, that stirring can increase the rate of dissolution! Who knows what else they might find? The possibilities are limitless.

So, it really didn't take much for me to do an about-face on the idea of bringing an engineering mindset to the science classroom. The engineering mindset should not be viewed as a bonus or an add-on to quality science instruction: it is the very vehicle for delivering quality instruction. Getting rid of this misconception was a bit easier than letting go of the idea of Santa Claus coming down the chimney every Christmas. What about you? What misconceptions—from beloved childhood icons to science pedagogy—have you rethought over time? 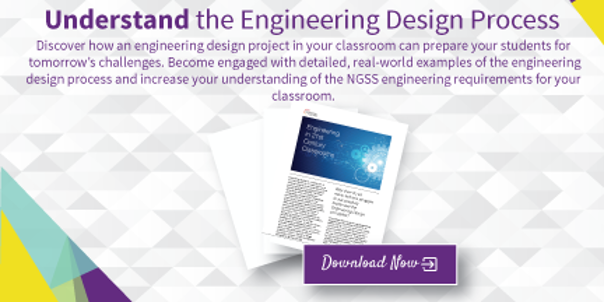