Flight 214: the Science of Safer Planes

The final moment of Asiana flight 214 as it scraped across San Francisco International Airport on July 6 must have been terrifying.  Photography of the downed plane shows massive gashes in the cabin caused by intense flames, a missing tail section, and a landscape littered with debris. However, despite the extensive damage, the marvel at how the well-trained flight crew and series of technological innovations made flight 214 less of a tragedy than it could have been.  In fact, the aviation industry is relatively safe; on average less than 800 lives are claimed annually due to commercial air travel worldwide.  Comparatively, the National Highway Traffic Safety Administration reports that in 2011 alone there were 29,757 fatal motor vehicle crashes (nearly 40 times more deaths per year when compared to air travel).  Nonetheless, despite the rarity of airplane crashes, scientists pour over the subject to develop safer planes. 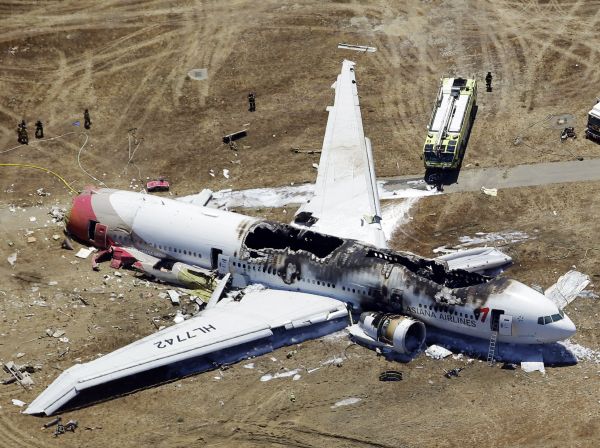 Aerial photo of the wreckage of  Asiana Flight 214 after it crashed at the San Francisco International Airport in San Francisco, on 7/6/13.  (Marcio Jose Sanchez / Associated Press)

Turbulence and wind shear, or changes in wind speed and direction in a small area, still pose a threat to planes.  Atmospheric phenomenon such as microbursts, a powerful downward gust of wind, are linked to numerous aircraft accidents.  The development of sophisticated scanning technologies – microwave radar, Doppler LIDAR, and infrared – have allowed pilots and on-board computers to predict turbulence and wind shear in an effort to compensate or all together avoid it.  Though each scanning technology has a drawback, the three together are able to give a complete picture of atmospheric conditions by tuning into different parts of the electromagnetic spectrum.  Microwave radars excel at detecting larger rain droplets and their speed; on the other hand, Doppler LIDAR bounces lasers of aerosols, or microscopic particles suspended in air, to detect wind speed and direction but functions poorly in heavy rain.  Finally, infrared scanners measure thermal energy put off by carbon dioxide in order to detect columns of cool air that are characteristic of microbursts.  All of these systems suffer from interference when a plane is close to the ground –turning off your devices during landing and takeoff helps minimize the interference.  Nonetheless, ground installations are necessary during landing and takeoff to communicate with planes near the surface and provide data on turbulence and wind shear.

Fires are among the greatest hazard to passengers in a plane crash.  Planes carry hundreds of gallons of highly explosive fuel, which can easily ignite by the friction and sparks created during emergency landing.  As a result, thermally insulating all surfaces helps passengers earn extra time to evacuate the cabin before it is engulfed in flames.  Since 2003, planes have been retrofitted to use more flame-retardant materials that produce less smoke-emissions both in seat cushions, ceiling and wall panels, and cabins.  At the same time, exit passageways have been expanded and better illuminated to help direct passengers to the nearest exit when a fire does break out. 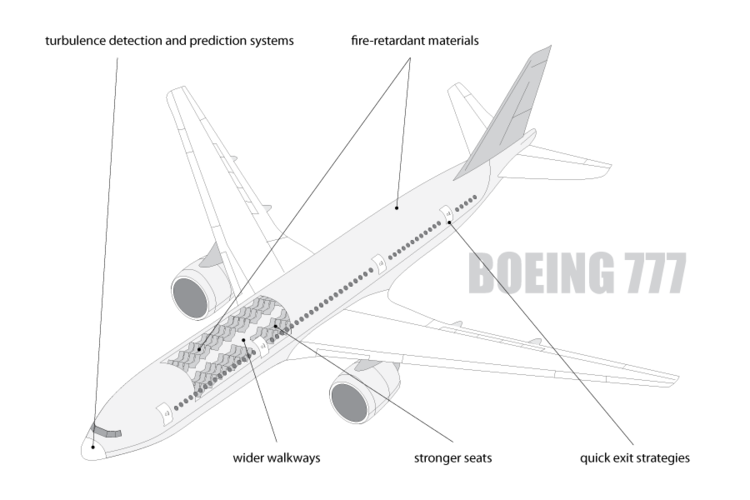 Seats have undergone a big overhaul as well.  In 1952, airplane seats were designed to withstand only 9-G, or nine times the force of gravity, before snapping free.  Their more modern cousins are standardized to bear 16-G forces.   This means that the sudden deceleration caused by hitting the ground is less likely to break seats off their harnesses and send passengers flying against cabin walls or other passengers.  However, seat belts are a different story.  Common sense tells you that having shoulder restraints on planes would help reduce injuries and deaths caused by people hitting their heads during a crash.  Still, there’s not enough data to show they would actually help.  In a car accident, the force is horizontal – you tend to lunge forward.  In a plane crash, you also have to contend with vertical forces, which might mean that a seatbelt does little to help reduce injuries.  The bottom line is that commercial airlines are reluctant to invest the money to add shoulder restraints until there is enough evidence to show it will help safe lives.

By no means are these innovations an exhaustive list.  Scientists such as physicists and biologists often collaborate with aeronautical engineers and structural engineers to continue creating advances in aviation safety.  Pilot skills and flight crew training also have a huge influence on how an airplane accident plays out.  Despite the tragedy of two lives lost in Flight 214, the data accumulated from the accident will help usher in the next wave of aircraft safety innovations.