Posted by Science Explored on February 25, 2013

Scientists and engineers are constantly researching ways to sustainably power the resources we use each day.  When it comes to generating electricity, we typically think of the usual suspects:  solar power, wind turbines, coal plants, and hydroelectric dams.  In reality, a plethora of other ways exists to power our televisions, lights, and the countless electronics we use every day.  One of the most creative methods of generating renewable energy is the solar power tower, which is beginning to take root as a viable power source. 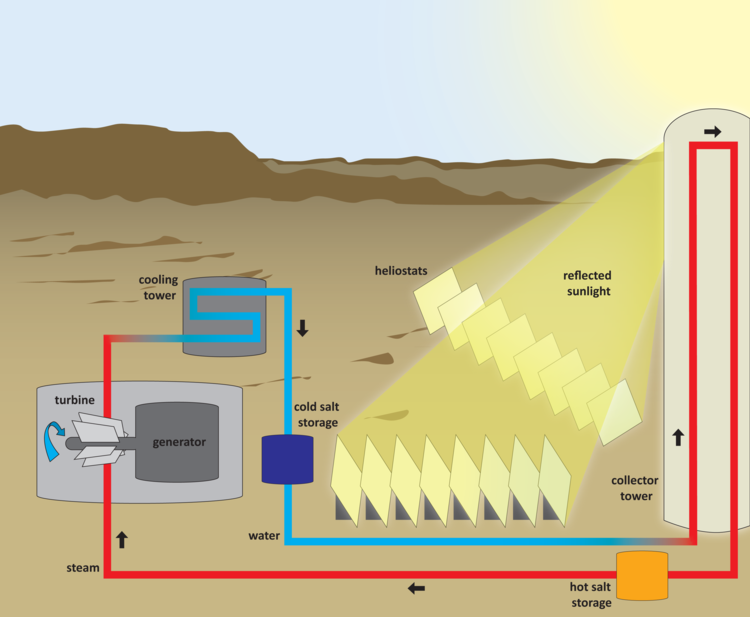 The solar power tower works on an amazingly simple principle:  reflected sunlight.  Imagine driving across a dry, deserted landscape when, in the distance, you see a looming tower, brilliantly lit by the confluence of dozens of visible sunrays.  This is the sight you would encounter as you approached the PS10 Solar Power Tower in Seville, Spain.  Completed in 2006, the PS10 SPT is relatively small compared to two new towers being built this year in California and Nevada.  SPTs use an array of repositionable mirrors called heliostats to reflect the sun’s light on a central collector tower.  Unlike solar panels, the mirrors do not generate electricity but rather focus sunlight on the collector tower, effectively heating it.  Inside the collector tower is a large pipe carrying water to and from a reservoir.  As the water inside the tower heats up – think of a giant cooking pot – the thermal energy causes the water to change from liquid to gas, or water vapor in this case, at a temperature over 500 degrees Celsius.  Steam is less dense than air, causing it to rise.  As it rises, it forces its way through the pipe and through a turbine.  The movement of the steam spins a turbine connected to a generator, generating electricity.  The steam eventually cools as it travels and is captured, condensed, and fed back into the reservoir as liquid water, which then takes its next trip through the collector tower’s pipe system.  In sum, thermal energy is changed to kinetic energy in the form of moving water vapor, which is then changed to electrical energy for daily consumption.

Simple?  Surprisingly yes, although SPTs are not without problems.  One of the biggest problems is that the collector tower and heliostats can get so hot that they crack and crumble from exposure to too much heat.  Engineers have attacked this problem by building in small channels in the mirrors and collector tower that allow air (or in some cases, pumped water) to flow around the structures to cool the materials.  Still, another problem lies in getting water to the collector tower’s reservoir.  SPTs are constructed in sunny areas so that they can maximize the amount of electricity they produce.  Many times, these sunny areas are arid, or extremely dry.  To get water, expensive wells must be dug or a costly pipe system must be installed to bring the water from somewhere else.  This brings up another problem:  what happens if the sun is not shining?  Materials engineers and chemists have used innovative molten salts as a kind of battery in SPTs to still generate electricity on cloudy days or at night.  These materials can absorb a lot of heat without turning into a gas and can remain hot for hours.  The result is that they can store heat on sunny days and then evaporate the central tower’s reservoir to make steam when electricity is needed in the absence of sunlight.

By now you might think that an SPT might be more trouble than it is worth.  But remember that SPTs can generate large amounts of electricity for their relatively low construction costs when compared to coal and nuclear power plants.  The Ivanpah Solar Power Facility (http://ivanpahsolar.com/) being built in California’s Mojave Desert is planned to generate an average of 377 megawatts of electricity per day (compare that to a typical, 80-foot wind turbine that produces an average of 1.5 megawatts per day).  That is enough renewable power for more than 140,000 homes per year with an added benefit of less environmental impact than hydroelectric dams or wind turbines.  As the technology improves, SPTs will become cheaper and easier to build, making it a technology to look for in the future.