Posted by Marissa Alonzo on December 28, 2015
Find me on:
Twitter 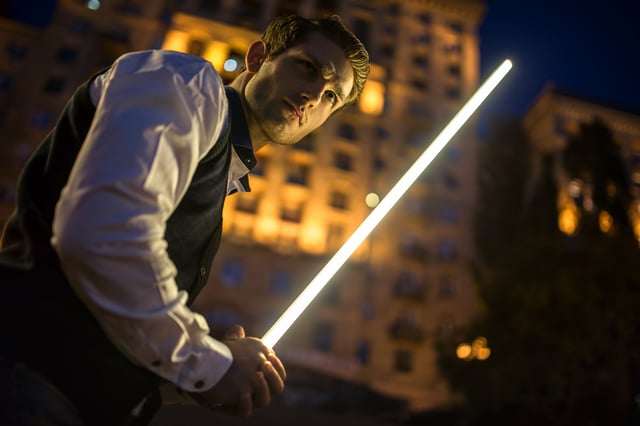 Star Wars: The Force Awakens debuted to millions around the world. Could they possibly own a lightsaber of their own one day?

Star Wars: The Force Awakens had a historic opening weekend, with an estimated $238 million in ticket sales in the United States alone. This incredible cinematic feat not only spoke to audiences of all ages but also intrigued many across the board from its greatly written storyline to its beautifully orchestrated action scenes and portrayal of science in a galaxy far away.

For science educators, the movie sparks a new interest in the classroom and makes it possible to generate a new understanding of different portions of the movie. One question in particular that has been discussed since the beginning of the Star Wars series is the possibility of lightsabers. Basically, people want to know—Can lightsabers exist and are they a possibility in the future?

The short answer to these questions is no. As much as the idea of being able to playfully duel your friends with lightsabers appeals to most, the science behind it makes it virtually impossible.

According to an article posted on physics.org, there are several factors that would have to be certain before a lightsaber could be made. First, if a lightsaber were true to the movie, it would need to be short in order to contain a laser beam. This can be ruled out because lasers do not have an actual fixed length; unless the light is scattered, a laser is essentially invisible as it passes through the air. Unless there is something in its way to absorb or reflect the energy, the laser itself could not be seen. If you have ever owned a laser pointer, you may be able to recall that the only time you would actually see the point of light is when the pointer is fixed on a directed object.

The second issue, as determined by the article, is the way you power up the lightsaber. The laser itself would have to be quite powerful. This would require the lightsaber to run on an extensive amount of energy and have a way to make sure it does not overheat. Running on a standard battery alone would not suffice, which means you would have to plug yourself up into a main source of power.

Lastly, if a lightsaber did contain a laser, true laser beams would pass through each other and would easily be deflected by reflection. This, of course, would not allow you to cut through anything; the lasers would just serve to annoy anyone with a set of eyes.

Are you bummed by the news yet?

Perhaps, you should not be. In an article published in Time magazine in October 2013, an experiment is described in which a team of physicists at Harvard and MIT discovered ways to bind photons together to form a new molecule, something that behaved similarly to the light you see in the lightsabers depicted in Star Wars.

According to the article, the scientists found that "...when the photons emerged from the other side of the cloud, they clumped together into a single molecule, which scientists then forced to move through the cloud together with a push and pull motion." The scientists manipulated the photons by firing one photon through a cloud of rubidium in a chamber cooled by lasers at just a few degrees above absolute zero.

Needless to say, the discovery has left us wondering if lightsabers really might be something that could have potential. As science discovery progresses, we get closer to allowing some science fiction to become reality.