Posted by Marissa Alonzo on November 24, 2015
Find me on:
Twitter 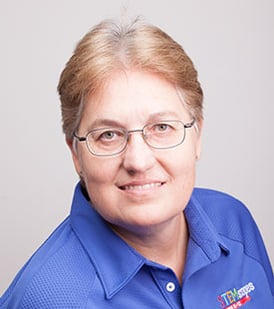 Accelerate Learning has had an interesting past with hopes for an even more influential future in STEM education. Inside the walls of the corporate office you will find staff working on many different projects at any given time. One of those staff members is the Vice President of Professional Services, Lisa Webber.

Lisa joined the staff in 2012, but she had been active in the inception and development of the curriculum well before that time. From 2007 to 2012 she worked at the Rice University Elementary Models Science Lab, where she worked closely with Reid Whitaker, the Founder and Chief Academic Officer of STEMscopes. As Reid began to write TAKSscopes (in response to a need for curriculum in the classroom), she became a leader of the lab and was eventually invited to move on with Reid as the overseer of District Relations for STEMscopes.By 2012,STEMscopes had a small but strong team. As Lisa settled into her role, she found herself wearing many hats: leading training, marketing, conferences, and communication between districts. This role made sure Lisa was very busy and eventually evolved into her current position as Vice President of Professional Services.

"The Professional Services team enjoys interacting with teachers. When we see the 'aha' moment when they realize that our curriculum is going to make their life easier and more engaging for their students, it validates everything we are doing," Lisa said in response to what makes the team so influential in the retention of the curriculum.

As a former educator, Lisa knows the importance of her work at STEMscopes and even more importantly: science.  Prior to coming to Rice University, she served as the Science Specialist for Houston ISD where she was in charge of the southwest Houston area science curriculum. Her love for science had early roots. This began in fourth grade by Mrs. Verby.

"I still remember all of the hands-on activities we did in science that year. I had my own mealworm that I measured and drew everyday, watching it change into a beetle. I knew at that point that I wanted to be a scientist."

Lisa received her bachelor's degree in geology from Illinois State University. Upon her graduation, she began a brilliant science career beginning  at the Department of Defense as a mapping agent where she helped keep the maps of the world up-to-date. She followed that with another mapping position, this time with the U.S. Geological Survey. Here she helped create expansive mappings of the ocean floors and the geological world beneath it. At that time she also went back to school to study wildlife management, which supported her next endeavor—working for several zoos.

In those positions Lisa trained many animals at several zoos, and she found that elephants were her favorite. This love is the reason she found herself in Houston, TX. She began training elephants at the Houston Zoo.

"I really enjoyed working with the elephants. They are so intelligent and have their own personalities. We collected blood so that we could breed them, to help make sure they don't go extinct in the wild. I also enjoyed working with the schoolchildren who came to visit the zoo. One of my favorite questions was a student who asked me if we had to peel bananas for the elephants. I asked him 'Do you think they get peeled in the wild?' and he responded ' I guess not' and we both laughed," she recalls.

Lisa still carries on her love of animals by rescuing dogs: currently, she has three in her family home. An avid adventurer, she is a certified scuba diver, and has traveled to many places around the world, including Africa, where she taught in Tanzania under a teaching grant. All her travels and experiences have made her a crucial member of the Accelerate Learning team.