Posted by Science Explored on February 16, 2013

Up there in the sky…it's a bird!  It's a plane!  No, it's an asteroid!  On February 15th, 2013 a 150-foot wide asteroid named 2012 DA14 will graze the Earth.  In fact, it will pass so close to Earth that it will be closer to the atmosphere than some of our satellites.  If Hollywood were in charge of this asteroid, it would likely follow suit of movies like Armageddon and Deep Impact where Earth's leaders bravely send a salvo of nuclear weapons to intercept and destroy the asteroid before it hits our planet, or hire an elite team to land on the asteroid and plant an explosive on it. 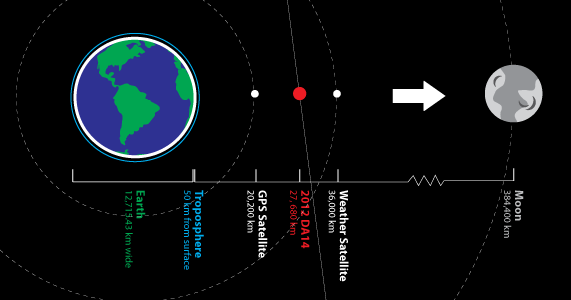 Ed Lu, a former NASA astronaut, sees things a little differently.  He founded the B612 Foundation, an organization whose purpose is to discover asteroids that can threaten our world and act to prevent a potential disaster.  Lu's fears are not mile-wide asteroids, the sort of which likely ended the dinosaurs’ reign on Earth 66 million years ago, but smaller ones like 2012 DA14.   Even a small asteroid the size of DA14 would generate enough force on impact to destroy a city the size of Austin.  Its damage would spread even further by blanketing a large part of the sky with dust, blocking sunlight and killing plants if the cloud persisted long enough.  An asteroid of this size was responsible for a 1,000 square mile swath of destruction in the Tunguska River region of Siberia in 1908.

Astronomers estimate that there could be as many as one million 2012 DA14-sized asteroids in our solar system.  Many of these are the remains of condensed gases from our solar system's formation that lacked enough gravity to pull together and form another planet.  Lu was motivated to form the B612 Foundation because professional and hobbyist astronomers have only located and identified about 10,000, or 1%, of these asteroids.  That leaves 99% unaccounted for and potentially dangerous to us in the years to come.

What if we manage to identify and track an asteroid on a collision course with Earth?  What could we do?  Lu doesn't agree that trying to blow up an asteroid is the best solution.  The two issues with trying to do so are the difficulty of hitting a moving target (imagine hitting a moving baseball midair with a marble from 100 feet away) and the fear that we may shatter the asteroid in multiple pieces that would rain down on our planet, still causing damage.

Lu suggests a far simpler solution:  send a robot to land on the asteroid and nudge it out of the way over years using a small rocket.  This plan is a perfect solution if we have enough advance notice that the asteroid is approaching.  In fact, if we had enough warning, we could even send a robot massive enough that with gravity alone would attract and slowly alter the path of the asteroid away from the Earth.  Regardless of how we protect ourselves in the future, one thing is sure:  it's only a matter of time until an asteroid like 2012 DA14 or larger finds its way to Earth.  What other ways do you think humanity could protect itself from future asteroids?