Taking out the Trash: Space Debris

Taking out the trash tonight?  We can agree it’s an easily done yet annoying daily chore.  On the other hand, “taking out the trash” in space is a huge undertaking, and we’re overdue for a cleanup.  Space debris – also called orbital debris, space junk, or space waste – is a danger not only to future, manned space travel but also represents a costly hazard for satellites.  Currently, almost 20,000 pieces of space debris larger than five centimeters (about the size of a paperclip) are tracked with another 300,000 pieces smaller than one centimeter (the size of a new eraser on the end of your pencil).  These orbiting pieces of junk include flecks of paint, tiny meteors, pieces of old satellites, micrometeoroids, and components of spent rockets once used to propel the space shuttle and other vehicles into space.  You might be asking yourself, “what danger could these tiny particles pose?”

Space debris travels at tremendous velocities; many particles travel in excess of 15,000 mph!  At these speeds, even a grain of sand has as the ability to punch a hole through a steel plate, and space debris tends to be even larger.  In comparison, the average bullet travels at only 2,000 mph.   An upcoming Warner Bros. Picture Group movie, Gravity (view trailer), hints at just how terrifying space debris can be.  One collision causes a chain reaction of more and more things breaking up and becoming space waste.  So far, space debris has caused few problems, but in 2009 a private communications satellite named Iridium 33 destroyed itself and a Russian military satellite named Kosmos-2251 as they collided.  Their collision mangled and destroyed the satellites, adding to thousands of pounds of already existing space debris.  Scientist fear that as collisions become more frequent, future journeys to Mars or present-day spacewalks could be in jeopardy as spacecraft get punctured and destroyed by space debris.  Furthermore, present day satellites have little to no shielding.  As space debris collides with our satellites, not only will billions of dollars be spent on repairs but also telephone communications, television broadcasts, weather forecasts, and mapping systems may stop working as satellites are damaged beyond repair. 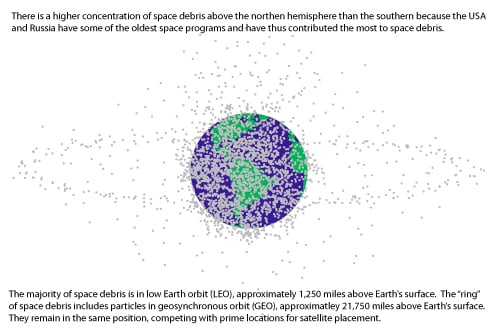 Options on how to deal with space waste are expensive, “but one has to compare the costs of what we are investing to solve the problem as compared to losing the infrastructure that we have in orbit,” said Heiner Klinkrad, a European Space Agency expert on space debris.  Klinkrad suggests that if we do not address the issue of space debris, we will pay far more in replacing lost satellites, spacecraft, and potential lost human lives than we would by creating something to address the problem.  A few ideas have been proposed from simple to wild.  The International Space Station (ISS), for example, protects its more vital areas and crew sections with a type of layering on its hull called a “whipple shield” invented by Fred Whipple over 50 years ago.  Though there are many variations of the whipple shield on the ISS, the basic idea is to use a “bumper” attached on the spacecraft’s outer wall to spread out the force of impact across the inner wall to reduce damage.  Still, the whipple shield is bulky and costly to transport because it adds a lot of mass to the carrier, meaning more fuel is needed to lift it out of Earth’s atmosphere.

Some of the more radical ways to “take out” space debris include ground based lasers that would vaporize smaller orbiting particles (larger particles are too big to be destroyed this way).  Another option involves sending robots into space that latch onto some of the larger pieces and push them into Earth’s atmosphere to burn up.  One solution that has been ruled out is detonating explosives to blow up defunct satellites and large pieces of space junk (see Stopping an Asteroid blog) because it turns one, large avoidable piece into countless tiny, unavoidable pieces.  In 2007, China used a missile to destroy one of their old weather satellites and thousands of new particles spewed out to join clumps of space debris around the Earth.  Scientists and engineers are still looking for the optimal solution.  Regardless of how we solve the orbital debris problem, if it continues unaddressed, the planned mission to Mars and the installation of new satellites may become too costly to justify.