Posted by Science Explored on February 25, 2014 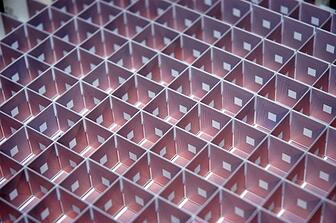 Above:  Duke's electrical engineering department may have designed a material that can create electricity from WiFi signals around you.

Metamaterials are a group of substances that have unique properties en masse.  They are not found in nature. Rather, they are fabricated in labs and often look like honeycombs. A team of Duke scientists has created a metamaterial that may be able to make energy from ambient radio, microwave, and WiFi signals.  Imagine being able to charge your phone simply by being near a WiFi signal. You would be able to stop in at a coffee shop, check an email, and charge your phone without the need for a plug-in.   It may seem like novel technology, but it’s actual based on the same science used in power mats.

Power mats rely on a process called inductive charging, or wireless charging.  By “tuning” two nearby conductive coils to one another such as one inside a power mat and one inside your cell phone, electricity can be transferred without the need of a wire.  As the coil being fed electricity generates an oscillating magnetic field, the neighboring coil starts oscillating.  This electromagnetic oscillation results in the movement of electrons to charge your device.  Nevertheless, power mats can be problematic because the energy transfer efficiency between the coils is low because a lot of energy is lost as heat, not to mention your phone is a prisoner on the power mat while it recharges.

Duke’s metamaterials take inductive charging to a new level.  These metamaterials have numerous two-centimeter wide loops of wire clustered throughout.  Because these coils are small enough to embed in electronics, are highly conductive, and work in teams, they can create current from passing electromagnetic energy, such as Wi-Fi signals, rather than requiring a coil nearby.  Admittedly, Duke scientists recognize that they have improved current inductive charging technology, but metamaterials still cannot produce electricity from across the room. They still need to be within a few inches to generate current, but this is a substantial improvement from us untethering from power cables and even power mats that require your device to virtually be touching the mat to charge.