Digging for Oil: the Science of Fracking

In the 1990s, gasoline prices seldom exceeded $1.25.  Today, most of us agree that gas for less than $3.25 is a bargain (check out how gasoline prices have fluctuated over the last 20 years).  Increasing fuel prices is a trend that is likely to continue as oil, the principal ingredient of gasoline, becomes increasingly rare and expensive to extract from below the Earth’s surface.  Though electric engines are gaining in popularity, our dependency on oil and gasoline is likely to continue for the foreseeable future.  Petroleum engineers, geologists, and a slew of other scientific fields have a “patch” to our oil needs for the time being, but it is not without controversy.  Hydraulic fracturing (also called fracking) is a novel method of extracting petroleum from fields where traditional drilling techniques would produce too little to justify their cost.  To understand how fracking works we first need to understand a little about the nature of oil.

Many of us have an image of a vast underground cave filled with dark, shimmery oil, lying hundreds or thousands of feet below our feet.  Finding these oil reserves is less of a guessing game and more a hard science to locate oil caches.  Geologists use a variety of methods to locate oil deposits such as extremely sensitive magnetometers, sniffers, and, more commonly, the science of seismology.  When we drill for oil, we basically insert a long straw into the ground that “drinks up” the oil and pumps it back up to the surface.  Unfortunately, a lot of underground and undersea oil deposits are not huge subsurface pools; instead, the oil is trapped in the pores of rock (often shale) much like how a sponge holds water.  Drilling into the shale layers does little to release the oil trapped within the rock, but fracking has the ability to metaphorically “squeeze out the sponge” and release the shale-trapped oil.

A fracking operation begins by drilling a deep well, or borehole.  Wells vary in depth, but Chesapeake Energy reports that the average well depth is about 7,700 feet (2,347 meters) or the equivalent of about six laps around a track surrounding a soccer/football field.  Despite the extreme depth, most boreholes are only 1 foot (30.48 centimeters) in diameter.  Upon reaching a predetermined depth, engineers force the drill head to take a right or left turn that can span nearly ¾ the length of the entire borehole.  The turn can either be gradual or sharp thanks to motorized, steerable drill heads and up-to-the-minute measurement while drilling.  These turns are characteristic of fracking because it enables the wellbore to traverse a large underground shale bed and thereby extract more oil trapped within the porous shale.  Afterwards, the borehole is lined with a steel and concrete “skin” designed to protect surrounding groundwater and soil from any leaks caused by minor earthquakes, movement of the oil, or the use of fracking fluid (more on this later).  In the horizontal section of the wellbore, a specialized tool perforates the steel and concrete casing with tiny holes that are vital for extracting the oil from the shale.  The wellbore is then capped on the surface to pump a mixture of water, sand, and dozens of other chemicals that, under high pressure, travel down the wellbore, into the horizontal section, out the perforations, and into the surrounding shale.  Because the fracking fluid is both caustic and pumped in under extremely high-pressure, it cracks and breaks apart the shale, releasing the trapped oil.  The fracking liquid is then pumped out and oil follows up the wellbore to be collected.  The bore hole can then continue to produce oil (and natural gas because it exists alongside oil) for decades to come. 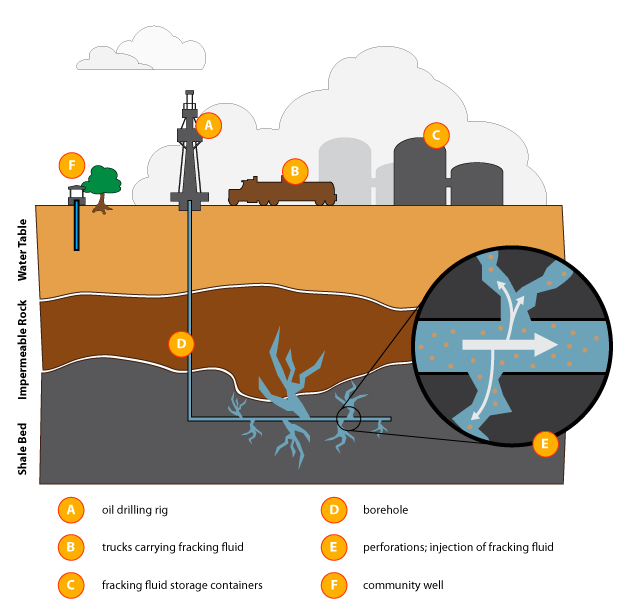 Though the process sounds straightforward, the real complexity comes when discussing the benefits and drawbacks of fracking.  It’s no surprise that fracking has proponents and critics eager to defend or outright forbid it.  One pro-fracking argument states that it helps preserve landscapes – rather than extracting oil with a multitude of vertical drilling installations dotting a landscape, the same goal can be accomplished thanks to horizontal drilling techniques.  Furthermore, natural gas, a cleaner alternative to oil, is almost exclusively accessible through fracking.  Companies invested in fracking are also quick to mention that this technique allows the United States to reduce the need of importing foreign oil, which creates more domestic jobs and bolsters our economy.  If oil continues to be a necessity, fracking represents a clear pathway to get it.

Counterarguments are offered just as quickly on the subject.  Anti-frackers assert that fracking has numerous pitfalls that outweigh its benefits.  For one, fracking requires a huge operation; hundreds of trucks, storage containers, and pieces of equipment are needed to successfully frack.  Despite needing only one borehole, those against fracking say that it transforms beautiful vistas into a massive worksite as trucks barrel in with equipment and workers from all directions.  Farmers and landowners fear that accidents, fracking fluid leaks, and oil spills during fracking can contaminate ground water, damage crops, and poison the land causing them to lose their livelihood.  In addition, the fluid itself requires millions of gallons of water, and areas experiencing drought are reluctant to give up their water supplies in the name of fracking.  Fracking companies have responded that they attempt to recycle the fracking fluid into future operations to minimize water consumption and waste.  Other groups feel that companies are overhyping the economic benefits of fracking just to make a quick buck.

Needless to say, the fracking debate rages on, and it likely will continue for the next few years.  A big problem is that there is a lack of scientific research on the harmful effects of fracking at this time.  Evidence that is currently available for fracking’s destructive effects is partial and incomplete, but new studies are produced daily.  For example, Time Magazine recently investigated claims of fracking (specifically, the pumping of millions of gallons of fracking fluid) causing minor earthquakes.  Many companies are performing their own research and media events to show that fracking is not as bad as it is made out to be.  Halliburton, for example, demonstrated its fracking fluid was benign by having a company executive drink it at a conference!  Regardless, fracking is a technology worth watching in the coming years; as we learn more about just how profoundly it can help or damage our country and communities, taking a firm stance on either side might become justified.