Drones have been making headlines in the news lately.  From the military to celebrity gossip show, TMZ, it seems that everyone wants a drone.  As a result, drones have received a lot of media attention lately but are often misunderstood.  Drones are simply remote controlled robots.  We are probably most familiar with large, aerial drones, but there are also seafaring ones.  A remote control car even qualifies as a drone.   Today we’re going to focus on the most popular and accessible drone to consumers:  the quadrotor.

Quadrotors, or quadcopters, are among humanity’s oldest flying machines.  In 1922 the massive Jerome-de Bothezat quadrotor (also know as the “Flying Octopus”) was one the first to make several, low-altitude flights (5 meters off the ground).  At the time, enormous, hydrogen-filled blimps were the only flying vehicles.  The Flying Octopus was proof that early inventors could make something fly in an entirely new way by using rotors, or a type or rotating wing.  If quadrotors were among the oldest flying vehicles why have they made a comeback now?  After all, the Flying Octopus had numerous failures:  it was complicated to control, unable to fly long distances because of fuel, and could not reach high speeds due to its weight and lack of power.  Still, in many ways, its design was ahead of its time but the technology needed to make it function as well as its designers had dreamed was lacking. 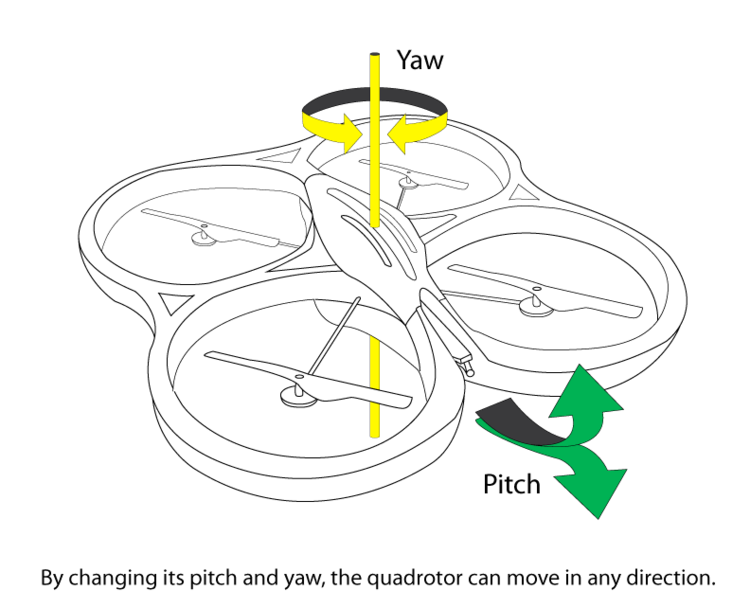 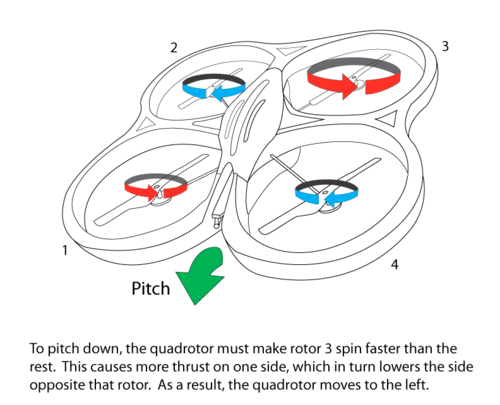 The four independently controlled rotors can adjust the drone’s yaw, or spin/rotate (like a DJ’s turntable), and pitch, or angle upwards/downwards (like nodding your head up and down), by changing the speed at which they spin.  To make the entire quadrotor yaw clockwise or counterclockwise, an opposite pair of rotors needs to spin faster than the other pair.  This allows torque to be stronger in either a clockwise or counterclockwise direction, which, in turn, spins the entire quadrotor.  In contrast, to make the quadrotor pitch up or down only one rotor needs to spin faster than the other three, causing the side with the faster moving rotor to pitch up and the opposite side to pitch down.  The result is that the whole quadrotor moves in the direction opposite of the side of the faster moving rotor.

Though a quadrotor’s workings might seem a little complicated, it’s actually much simpler both mechanically and in handling than a helicopter.  Helicopters have only two rotors:  a large horizontal one on top and a small vertical one mounted on the tail.  Though helicopters still rely on controlling thrust and torque, the collaboration between both rotors is a lot more complex to make the helicopter yaw and pitch the way its pilot wants.  This also means that helicopters take a lot more maintenance as their machinery gets worn and damaged more frequently.  Helicopters also cannot maneuver as easily as their quadrotor cousins.  This makes them impracticable for use in tight areas not to mention expensive to construct and maintain.

Thanks to tough, cheap, and light materials like carbon fiber and lighter, more powerful batteries, quadrotors can be bought and made by hobbyists around the world.  As quadrator technology develops further, there will be more opportunities for students to improve their design by studying computer science, electrical engineering, and mechanical engineering.  It might not be long before a pizza you order for delivery arrives on the back of a quadrotor thanks to a student’s work.